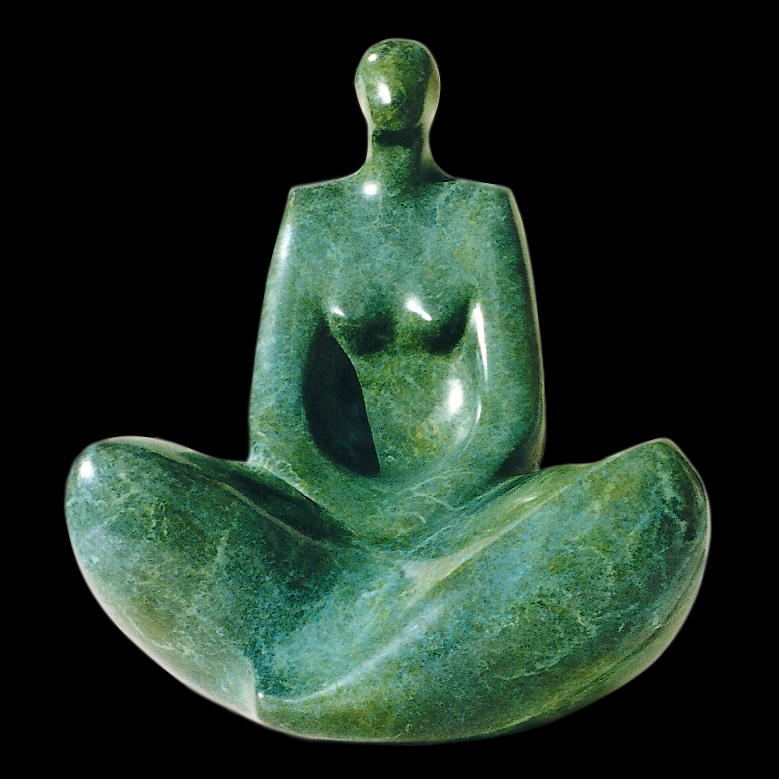 The sacred creative space
Entering the studio of Rosa Serra, I was immediately struck by the intensity and immensity of her life, and I knew I was visiting the sacred creative space of an artist who, years from now, will be celebrated and memorialized in the way that Frida Kahlo and Pablo Neruda are. I’d visited the homes and work spaces of Kahlo and Neruda, and had been captivated by their impulse to collect, document, and display, nearly every inch of space covered by ephemera. I’d also been disconsolate, made morose by the fact that Kahlo and Neruda were dead. I would never see them in these spaces. Though I could imagine them moving through their homes, inhabiting them fully, my imaginings were only that, and these spaces were nothing more than memorials and museums.

The wonderful thing about visiting Serra’s space, then, was that she was in it–alive and vibrant, a generous hostess offering small cups of coffee accompanied by a chocolate and thoughtful conversation. The deep sadness I’d felt in the shrines to Kahlo and Neruda had, finally, been counteracted by my being able to sit, quite literally, at the knee of a creative genius who worked and lived in this studio that was floor-to-rafters and wall-to-wall full of a life that was still in medias res.

There is, first of all, a collection of “Do Not Disturb” signs, pulled, presumably, from the doors of the many hotels in which Serra has stayed during the course of her rich career. These are tacked to the wall along the staircase that ascends to Serra’s second floor studio. Though the signs might give the impression that a cranky, reclusive artist is hard at work behind the studio door, Serra is nothing of the sort; she’s merely a collector who seems to see creative possibilities in almost any object, no matter how mundane. 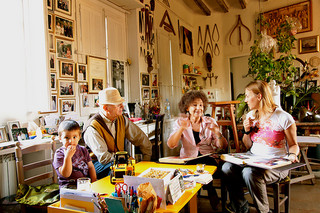 Serra in her studio, with her husband, artist Xavier Carbonell, their grandson, & writer Abigail King.
Inside the studio door, there’s enough to keep the eyes busy for hours: maquettes of her sculptures; jars of pencils, brushes, and Xacto knives; boxes of pencils, sharpeners, and erasers; dozens of framed photographs; sagging shelves of books; antique toys and games; bowls and bottles; a silver service tray laden with keys and key chains; statues; and a collection of old calipers.

Far from being a static display intended to charm visitors, Serra’s studio is very much a lived-in, worked-in space, and it’s here, in her studio in Olot, Catalunya, where the 68-year old Serra has created the sculptures for which she is famous. They are the same sculptures that have surprised her the most because, quite simply, she never set out to make them. A “right place, right people, right time” moment took her creative gifts and challenged her to apply them to a subject she didn’t know much about and never expected to work on: sports. And not just any sports, but the pinnacle of athletics: the Olympics. 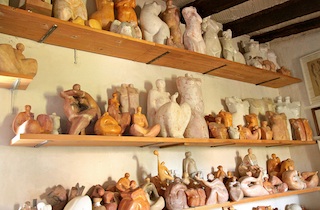 Just some of the many maquettes in Serra’s studio, including several Olympic pieces.
The thematic detour that has made Serra famous occurred because she happened to be friends with former International Olympic Committee President, Juan Antonio Samaranch. Samaranch, impressed by Serra’s creative gifts, asked her if she would accept a commission to create sculptures representing the different Olympic sports. Though Serra admitted that she knew nothing about sports, she accepted Samaranch’s invitation, inspired and motivated by the challenge of taking on a subject that was completely unknown to her.

Nearly three decades later, she continues to dedicate a significant amount of her artistic output to sports, and her exceptional sculptures have been recognized around the world. In fact, she has become so renowned for her sports sculptures–praised by critics for having force and motion without being mere replicas of a sport or athletic movement or gesture– that athletes from diverse disciplines have commissioned her to make sculptures. Among the most famous? American golfer Tiger Woods.

For Serra, the Olympic commission was an opportunity to become better at her craft. By accepting Samaranch’s invitation, Serra committed herself to learning more about the human body and about a diverse range of sports, and then apply that new knowledge to the varied materials with which she works. The sculptures, wrote Samaranch in the foreword to Suite Olympique, the catalog of Serra’s Olympic pieces, “are as if in praise and honour of the thousands of human beings who have left behind such great effort and sacrifice in search of greater physical excellence and the hope of eventual victory.”